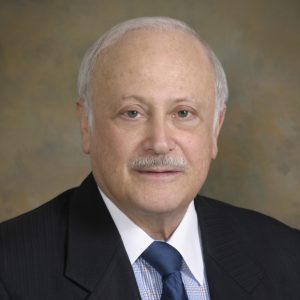 Dr. Robert Ritch holds the Shelley and Steven Einhorn Distinguished Chair; is Professor of Ophthalmology; Surgeon Director & Chief of Glaucoma Services Emeritus; Director of International Ophthalmic Education and Director of Glaucoma Research at the New York Eye & Ear Infirmary of Mount Sinai, New York City. He has devoted his career to broadening our understanding of the underlying etiologies and mechanisms of glaucoma and innovation in its medical, laser, and surgical treatment. When still a fellow in 1978, he performed the first laser iridotomy in New York and initiated the first course on laser treatment of glaucoma at the American Academy of Ophthalmology. He developed argon laser peripheral iridoplasty for the treatment of angle closure more complicated than pupillary block, which was instrumental in dealing with angle closure in East Asia, and taught on the diagnosis and treatment of angle closure around the world. His other major interests throughout his career have been pigment dispersion syndrome, exfoliation syndrome, and normal-tension glaucoma, to which he has made seminal contributions. Dr. Ritch received his B.A. cum laude from Harvard College and an M.A. in cell biology from Harvard University. He received his M.D. from Albert Einstein College of Medicine and, after an internship at St. Vincent’s Medical Center and a residency in Ophthalmology at Mount Sinai School of Medicine, received fellowships in glaucoma from the Heed Foundation and the National Institutes of Health. A Diplomate of the American Board of Ophthalmology, he is a Fellow of the American Academy of Ophthalmology, the American College of Surgeons, the International College of Surgeons, the Royal College of Ophthalmology, the Association for Research in Vision and Ophthalmology, and the New York Academy of Medicine, and is a member of more than 45 scientific and medical societies. Dr. Ritch has been President of the Ophthalmic Laser Surgical Society, the New York Glaucoma Society, the Section on Ophthalmology of the New York Academy of Medicine, and the New York Society for Clinical Ophthalmology. He serves on numerous medical and scientific advisory and editorial boards and is a member of the Glaucoma Research Society, the Steering Committee of the World Glaucoma Association, and the Board of Directors of the Pan-American Association of Ophthalmology. In 1996, Dr. Ritch received the Heed Ophthalmic Foundation Ophthalmologist of the Year award and in 1998, the Gold Medal of Merit and Honor from the Greek Glaucoma Society and the Ophthalmology Times Achievement in Ophthalmology Award. In 1999, he was one of the winners of the Louis Rudin Award for research in ophthalmology. In 2000, he received the Jesse H. Neal Award for Editorial Achievement. In 2002, Dr. Ritch was appointed to the Advisory Committee to the Board of Directors of the International Council of Ophthalmology and was elected Chairman of the Committee in 2009 and appointed to the Board of Directors of the International Council. He was elected to the Board of Trustees of the Association for Research in Vision and Ophthalmology and served as Vice-President in 2006-2007. His awards since 2006 include the Albion O. Bernstein, MD Award of the Medical Society of the State of New York for outstanding contributions to medicine, the American Academy of Ophthalmology Lifetime Achievement Honor Award, the Leadership in Education in Ophthalmology (LEO) Award, the Dean’s Distinguished Research Award from the New York Medical College, The Glaucoma Foundation Award for Innovation and Excellence in Glaucoma, the TKC Liu Memorial Award for Leadership in Ophthalmology, the Dominick Purpura Distinguished Alumnus Annual Award from Albert Einstein College of Medicine, the ARVO Distinguished Service Award, ARVO Gold Fellowship, the HRH Prince Abdulaziz Al-Saud Prevention of Blindness Award (2010), the Jose Rizal International Medal (2011), and the Maghraby International Achievement Award (2012). In 2012, he was elected to Academia Ophthalmologica Internationalis. In 2017, he received the Joanne G. Angle ARVO Service Award, the SOI Honorary Award in Ophthalmology and the Presidential Award, Asia-Pacific Academy of Ophthalmology, Singapore Dr. Ritch has co-authored or edited more than ten textbooks and over 1750 medical and scientific papers, book chapters, articles and abstracts. He has presented nearly 900 lectures worldwide, including 52 named lectures. In 1985, he founded the Glaucoma Foundation and has served as Secretary, Medical Director, and Chairman of the Scientific Advisory Board. In 1994, he initiated the annual Optic Nerve Rescue and Regeneration Think Tank, which has attracted numerous successful researchers from other fields into glaucoma research. He also co-founded the New York Glaucoma Research Institute, a not-for-profit foundation to sponsor clinical research in glaucoma, the alt.support.glaucoma Internet newsgroup, the New York Glaucoma Support and Education Group, and the World Glaucoma Patient Association. He was one of the three organizers of the first annual World Glaucoma Day in 2008. He was co-founder of the Ophthalmic Laser Surgical Society, the New York Glaucoma Society, and the Lindberg Society, an international organization dedicated to the eradication of exfoliation syndrome; the ARVO Host-a-Research Program, the ARVO U.S.-Russia Ophthalmology Task Force, the Von Graefe Society, an international organization dedicated to the study of risk factors for glaucoma other than intraocular pressure. He has trained over 150 clinical and research fellows, many of whom occupy academic positions worldwide. The international training program that he established at the New York Eye and Ear Infirmary of Mount Sinai has hosted over 100 International Council of Ophthalmology fellows and more than 140 observers from over 40 countries. He has worked and lectured extensively at the international level over the last 35 years and has organized many symposia and conferences both in the United States and abroad and helped to establish residency and teaching programs and has made fundamental contributions to the modernization of ophthalmology in Thailand, Malaysia, the Philippines, Laos, Myanmar and other countries in Asia, and in Latin America. There are Asian, Brazilian, and International Ritch Fellows Societies. He has served as Convener for the Asia-Pacifica Academy of Ophthalmology and the World Ophthalmology Congress several times. At the June 2018 World Ophthalmology Congress in Barcelona, Spain, the International Council of Ophthalmology, which Dr. Ritch served as a Member of the Board of Trustees, organized a special symposium: “Robert Ritch Forum on Medicine of the Future”, the first of a series of symposia on cutting edge technology.

Grand Hospitaller of the Sovereign Order of the Orthodox Knights, 2014